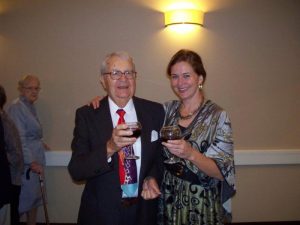 Dad came to DC in September for a reunion of sailors from the U.S.S. Hornet. Dad’s in the upper right corner, the classy looking one. I heard stories… these guys have lived a lot. I never knew Dad was an electrician working on the gyroscope of the ship. There were so many guys on the ship that even if they were on at the same time, they often didn’t know one another. Hard to imagine a floating city, but that’s what it sounds like.

It looks like Dad and Raya are coming to agreement on something, doesn’t it? They got along just fine, in fact, because Dad was not opposed to feeding her.

We went from elegant to tourist from one day to the next. We toured the city, saw the Washington Monument and Arlington National Cemetery, visited the tribute to those who died at the Pentagon on 9-11, and closed the week with a lovely dinner in honor of the attendees.

Part of Dad’s tour took him to the U.S. Naval Academy in Annapolis, where he met this goat. Ram? Something.

Another evening’s fun took us to the Kennedy Center for a rousing showing of Shear Madness, a play about a murder in a hair salon that changes each night based on audience suggestions. There was a hamburger hat in the lobby that Dad refused to buy for me, but he did take this lovely photo.

Even better, in Dad’s mind, than me in a hamburger hat is the following photo of me standing in front of the Air Force tribute to the DC victims of 9-11. I know he thinks this is very funny, otherwise I wouldn’t include it here. I just wish I’d been having a better hair day.