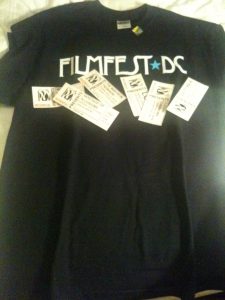 Waiting for the bus is disconcertingly normal after being transported to Buenos Aires this evening. I’m outside the Avalon theater in Washington, DC, but just exiting the theater means I was just “somewhere else.”  A good movie can steal you from time and place and fully implant you in another. This one was called “Hostage of Illusions” and I’ve just lived through the main characters’ torrid affair, in which an aging writer finds paradisiacal youth outside his marriage.

Then he finds out his young lover has her own secrets.  The filmmaker insinuates that perhaps the lover is one of the children taken from the desparecidos (disappeared) – those lost to the dictatorship – and placed in loyal families’ households.  Eerie, troubling, beautiful, and human.

The film is part of Filmfest DC, one of six I’ve seen so far.  The first night, I went to Italy to hang out with a traditional family that owns a pasta factory, in a movie called “Loose Cannons.” Well, they’re sort of traditional – I can’t spoil the twist but the family really entertains.  There’s a grandma who has lived her share of life – she’s made some compromises but lived to the fullest anyway – and a nutty auntie who’s rebelling against the old maid label.  The family has to come to terms with the contemporary world in one swell foop, and it’s not easy – when it starts, the patriarch has an almost immediate heart attack.  But they find a way to move forward.  I guess that’s what we all do.

Next we leap into the end of the 16th century in Madrid – for “Lope” which tells a fictionalized version of the writing heyday of Lope de Vega.  The city has that pre-plumbing squalor down just right, but there’s a city view in one shot that makes me wonder – how did they excise out all the modern skyscrapers from the skyline?  It’s beautiful.  The lead male actor has a certain spunkiness that is endearing as he tries to get his plays read by the mercantile controllers of the theater “industry” of the time.  The female lead is lovely and devoted to him, though from a modern perspective I’d have to ask why – as she has plenty of knowledge of his amorous misdeeds.  Anyway, it’s a fun romp, sort of “good old filmmaking” with a logical plot line and tried and true denouement.

Sunday I saw one of DC Filmfest’s featured South Korean films, The Man from Nowhere.  It is captivating, with very strong performances.  It starts with a double-cross and takes off from a point where no one trusts anyone, including a little girl.  Very intense.  As the tricks and deceptions unravel, the filmmakers premiere some really clever writing and surprises; I did feel, though, that some of the cliches of action flicks kicked into gear later in the script.  Nevertheless, it kept me riveted, and the finale is spectacular – bloody, tense, beautifully choreographed.  I gave it a lot of stars, and not only because the lead character has the most attractive torso I’ve ever seen.  Which he does.

Then there was “Octubre” (October) from Peru.  A taciturn loan shark – I think he has Aspergers, actually – has his life disrupted when a baby is left on his doorstep.  It’s probably his, from one of the prostitutes he frequents.  The way he acts is like uber-man – all the worst stereotypes about men not being able to communicate, and not having or sharing feelings – it’s 10X worse.

There’s a side story about an elderly guy who is saving his pension to escape from Lima, and he “rescues” his comatose elderly girlfriend from a state hospital.Â  He just sort of rolls her around town.  “I’m going to all this trouble because she’s my girlfriend,” he answers when someone finally asks.

Today I volunteered for the Cinema for Seniors event, back at the Avalon.  A couple hundred or more elderly people came from centers all over the city.  I did almost nothing, except hold my umbrella over some of them when it started sprinkling out (and some of them move kind of slow.)  But I watched the movie with them – a documentary on the history of gospel music called “Rejoice and Shout.” You won’t find a movie that’s better pitched for that crowd if you try for the rest of your life.  Everyone was enraptured, even when they were making their way to the bathroom.  The film was lively, historically bound, beautifully filmed, moving.