Steamed up inside and out (Tbilisi)

Persian Baths.  What does that sound like to you?  I thought of mosaic tiles and cave-like walls, steam floating between me and several dozen other silent bathers, the drip of water from the ceiling to the tile…  It sounded exotic and heavenly to me.

I descended into the waiting room to enjoy a halting conversation with the attendant at an indistinct midpoint between English, Georgian, Russian and Sign Language.  After reassuring myself that I knew how much it all cost, I was sent to a space that looked like someone’s living room, complete with a brown leather sofa and chairs, coffee table, ashtray, and a box of unexplained Q-tips.Â  The attendant left me a packet of Head and Shoulders shampoo, spoke a few unintelligible things while gesturing toward the clock, the door, and somewhere off in the middle distance. O—kayyyyy.

At eye level, the room looked normal enough, but it’s underground.  The rolling brick and stone bubbles I saw from the street are the rounded roofs of these little rooms.  When you look up, the dome peaks at the top with a little stained-glass window ‘nipple’ 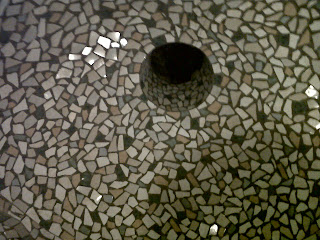 not unlike the tip of the Khinkali dumplings (eaten not half an hour ago) : 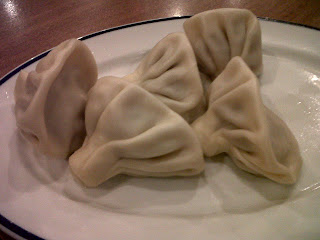 It’s not like I’ve never been in a spa before. I ran one for seven years, for heaven’s sake. I knew enough to get naked. What would happen after that was mildly mysterious, but not frightening – more like intriguing. Off the back of the living room a clangy metal door led me to the water room, with a marble slab and a pool of steam. The water ran lazily over the sides of the rectangular pool, slowly but constantly, a constant inflow of natural spring water.  Hot sulphur smell was part of the ambience, but not overwhelming.

DON’T look at the water, I kept telling myself as I lowered myself in, slowly, slowly, getting used to the heat.  Yeah, there are some floaties.  I don’t… know… what… they… were.  This might gross me out in the U.S., but damn, seventy quadrillion Georgians throughout history can’t be wrong. Not to mention the Persians, Turks, Russians, and everyone else who ever took advantage of steaming mineraly water coming out of the ground. So what if it was this same water? Just rest, breathe and rest.

I came out ten or fifteen minutes later, showered off a bit, and cooled off in what I’d named the Sofa Room.  Nana knocked for Phase II of the Persian bath – massage and skin scrubbing.  She took me back in the water room and laid me on the marble slab, giggling at my attempts to speak Russian.  She filled a bland little kitchen bucket with the steaming spring water and poured, poured, poured it over me.  Then she got out a scratchy mitt and scrubbed the crap out of me.  I worried about my skin – it turns REALLY red with something like this, and I didn’t want her to worry.  Then I realized – me and my white, indoor, sensitive skin – that was probably normal here!  All those Slavs and the like?  They probably all turn the color of beets just from brushing up against their clothes.  I belong!

Next it was soap.  Nana took what looked like an old, narrow pillow case and put some kind of soap in it – from the smell, I would swear it was Joy.  Anyway, she then blows into the pillow case, knots the top, and shakes and squeezes it till it makes an ungodly amount of foam.  She scrubs me down again with that, repeating the whole pillowcase-shaky-foam business a few times.  I don’t quite get it, but it’s making me laugh. No pictures – couldn’t get the camera wet, sorry.

Then, oh, massage.  Brusquer and shorter than the lay-on-a-cushy-table-in-Vail-while-all-your-minute-aches-are-surveyed-by-someone-with-more-degrees-than-you massages I’m accustomed to (and lots cheaper), it still has the effect of loosening me up and cracking my back.  Wonderful.  Finally, with a resounding pair of thwacks on my shoulders, she states, “Finish.”  Then she pours another ocean of that hot, hot water on me, while I’m laying down, after standing me up, and as I try to walk toward the shower – throwing the bucketfuls at me from across the water room.

In the guidebook Ali and Shane loaned me, there’s an essay about this place from a couple centuries ago, stating that, come what may, pay for the tea to end your bath.  “Sell your white stockings if you must, but have your tea!” it states, fervently.  So I did.  (Have my tea, that is.  I have no white stockings.)  A perfectly Russian little teapot and teacup, at least 600 cubes of sugar (you know, just in case), slices of bitter orange, and me.  I sat there a good twenty minutes before the attendant came back to see why I hadn’t left yet.  “One hour?” she asked, pleasant but bothered.  I got my ducks back in a row and went out into the cold night.

[…] to Dubai, Cambodia here, here and here, saw NYC at the height of tourist season, ate my way across Georgia (the ex-Soviet one, not the grits one), drank my way around Buenos Aires, Argentina, saw the […]