Liberia on the flip side 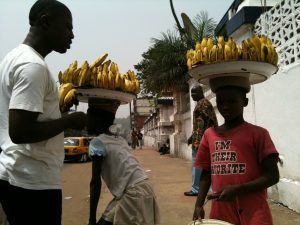 Second installment.  Okay, I learned something new today.  If you’re not abjectly miserable in your hotel room, don’t ask for a better hotel room.  The one I had was funky, a bit dark, and the pillows were weird (as if filled with crumpled poster board) – in short, a Pretty Good Hotel Room for a developing country.  I heard that some of the other rooms had ocean views, so I asked to change.  The room I got was so pretty!  It was freshly painted in bright sky blue (that’d be a Colorado sky blue, for the family folks who know what I mean) and had a little nook by the window with a table.  What a nice spot to work!

However.  The table top was not actually connected to the table bottom.  That was a surprise.  There were no towels, no toilet paper, no TV remote, no trash can, hairs on the sheets, something slimy on the bathroom floor, and the promised internet wasn’t working.  The front desk did call me to ask if they could send up the IT fellow – though it was at 10:30 p.m., which I found a bit odd.

The air conditioner was conveniently placed in that cute ‘nook’ but since I couldn’t work there, I couldn’t enjoy the cool air.  The air in the rest of the room remained muggy and warm.  I would have been better off sleeping with the window wide open. 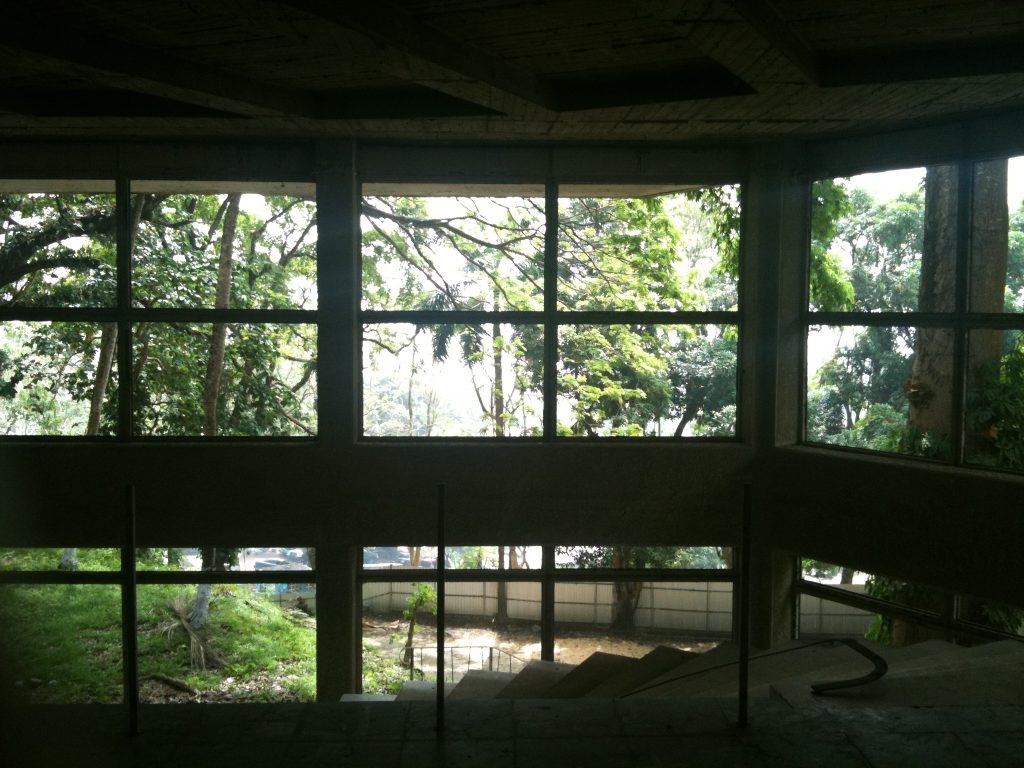 Oh, you say, you can’t sleep with the window wide open – what about the mosquitoes?  No, no, I’d never do that.  Nevertheless, at 4:00 I woke up out of a sound sleep, itching in every direction.  Something had hatched and entered the room somehow, and I had more than a dozen bites all at once.  I’m getting some malaria pills today to keep in my purse, just in case I start to get wicked sick.

I went to a rural county on Sunday to start data collection with the newly-trained field teams.  The road goes past a ‘town’ called Firestone – actually a rubber tree plantation run by, of course, Firestone.  The red taps on the trees collect the sap, which is shipped to the U.S. for processing.  Small, neat brick houses are clustered around, offering better conditions for workers than just a few years ago.  We have to stop at one such row of houses.  One of my team members just learned that his stepmother died, and it falls to him to inform his stepsister, who lives in Firestone.  He tells her husband.  When he gets back in the car he tells me it’s their cultural way of doing things – information goes through the husband.  Our project challenges male-female roles, and my American brain sees his way of doing things as a bit sexist.  But maybe the bereavement period is a bad time to try to change attitudes.

The town where we base ourselves is called Buchanan, and sits on the coast south of the capital.  The place was ravaged during the war and still shows it, very clearly.  The ocean is also taking its toll on the coastline.  It’s very run-down.  But they have the best doughnuts (pronounced doffnuts) ever, so that’s a plus.  Everything I buy costs many times more than when one of my Liberian colleagues buys it, but for the doughnuts it’s worth it.  For the hotel, it’s not – $125 a night for a very spacious but horrible room.  $4 for a can of locally-made Pringles, $12 for a piece of chicken and French fries. 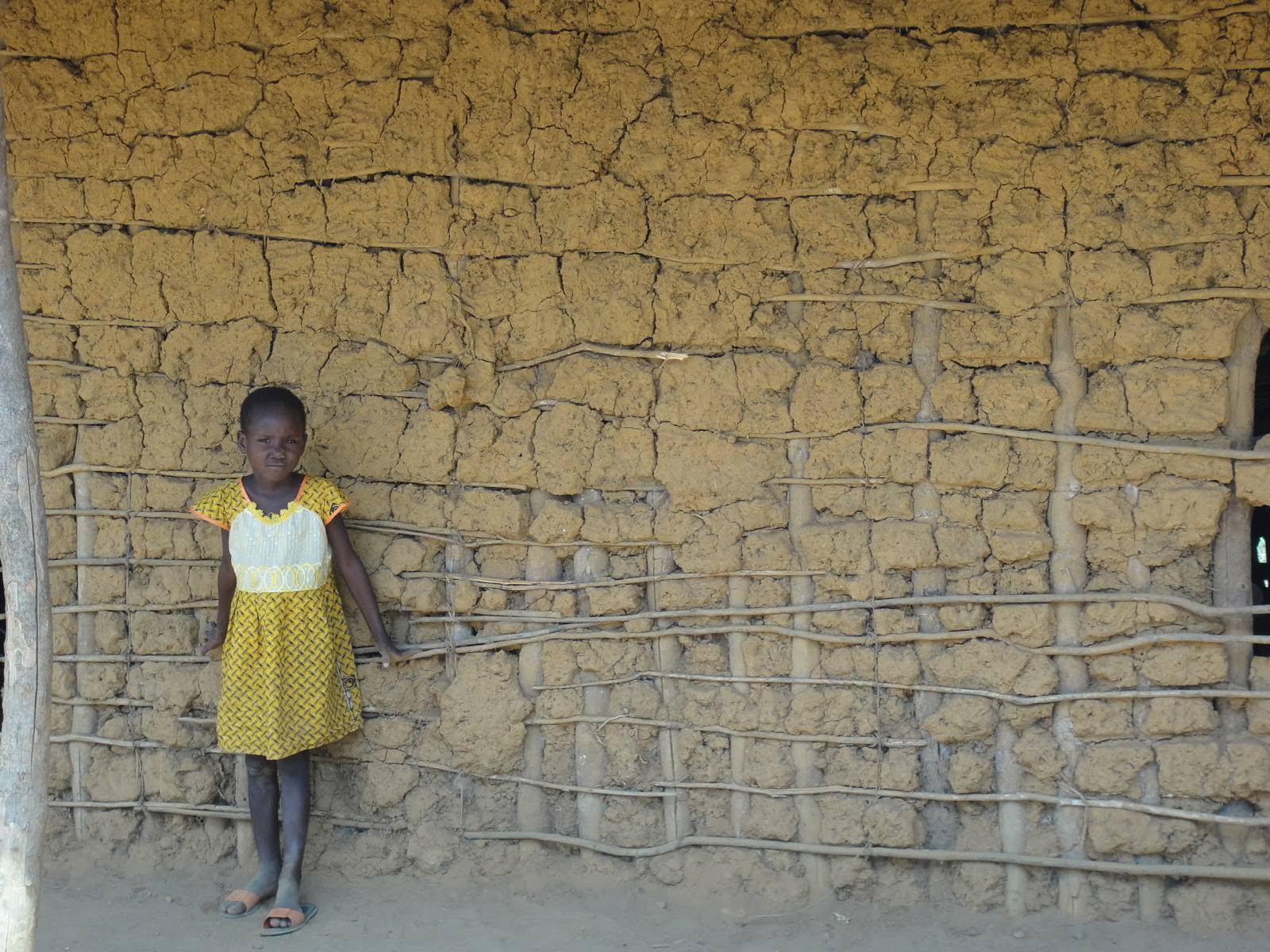 The first school we visit is modest in the extreme – wattle and daub, and pretty light on the daub, frankly. 151 kids under school age are seated on the floor at one end of a long room, a broken blackboard on a stand acting as the room divider.Â  The teacher is a little old guy named Arthur, without any teeth, or at least not many.  Next to him (in the same room) is a class of 30 kids who are in grades one and two; the room for grades three and four has about 14 total on the roster and six have shown up.  Drop-out is serious here. 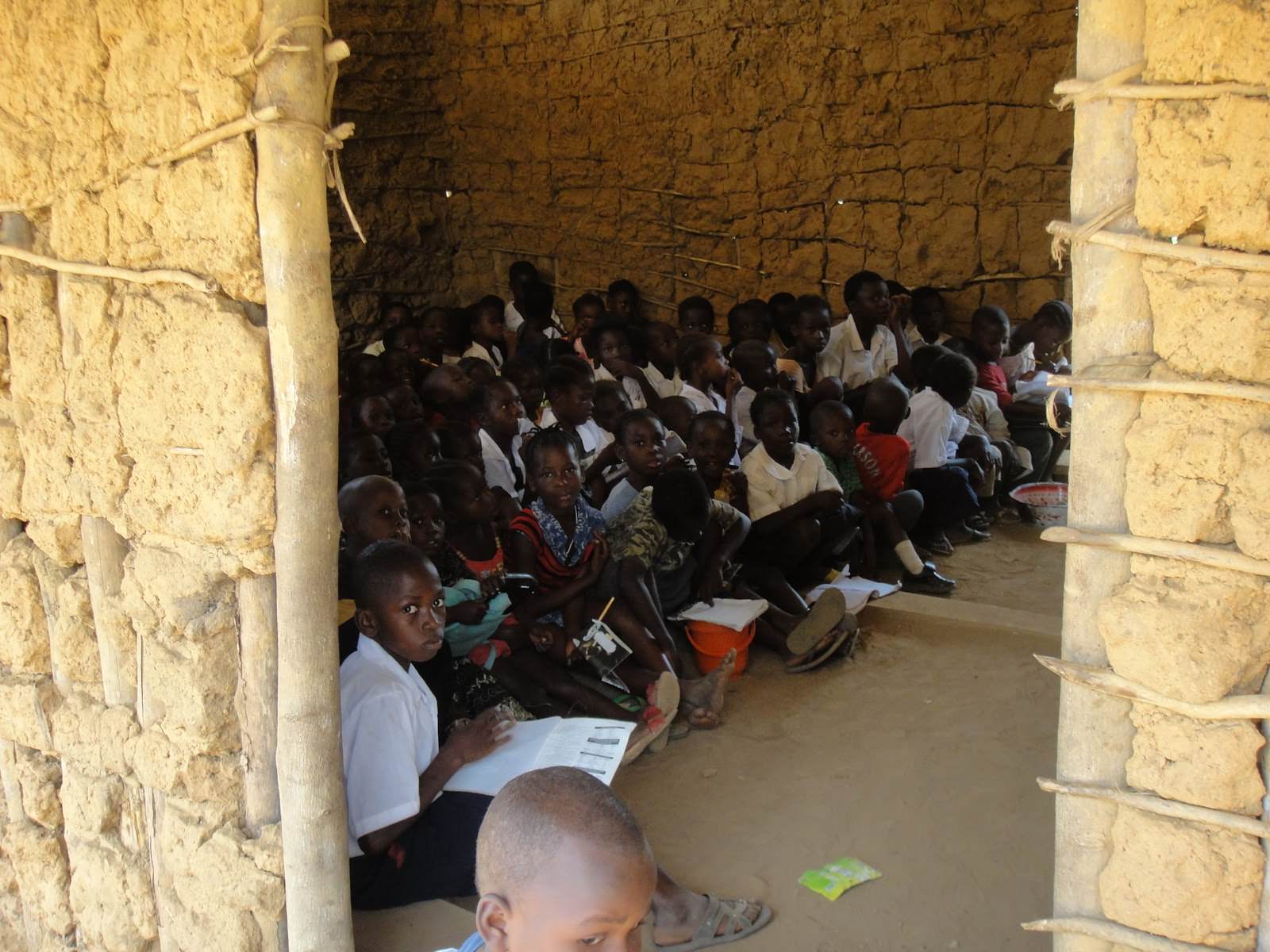 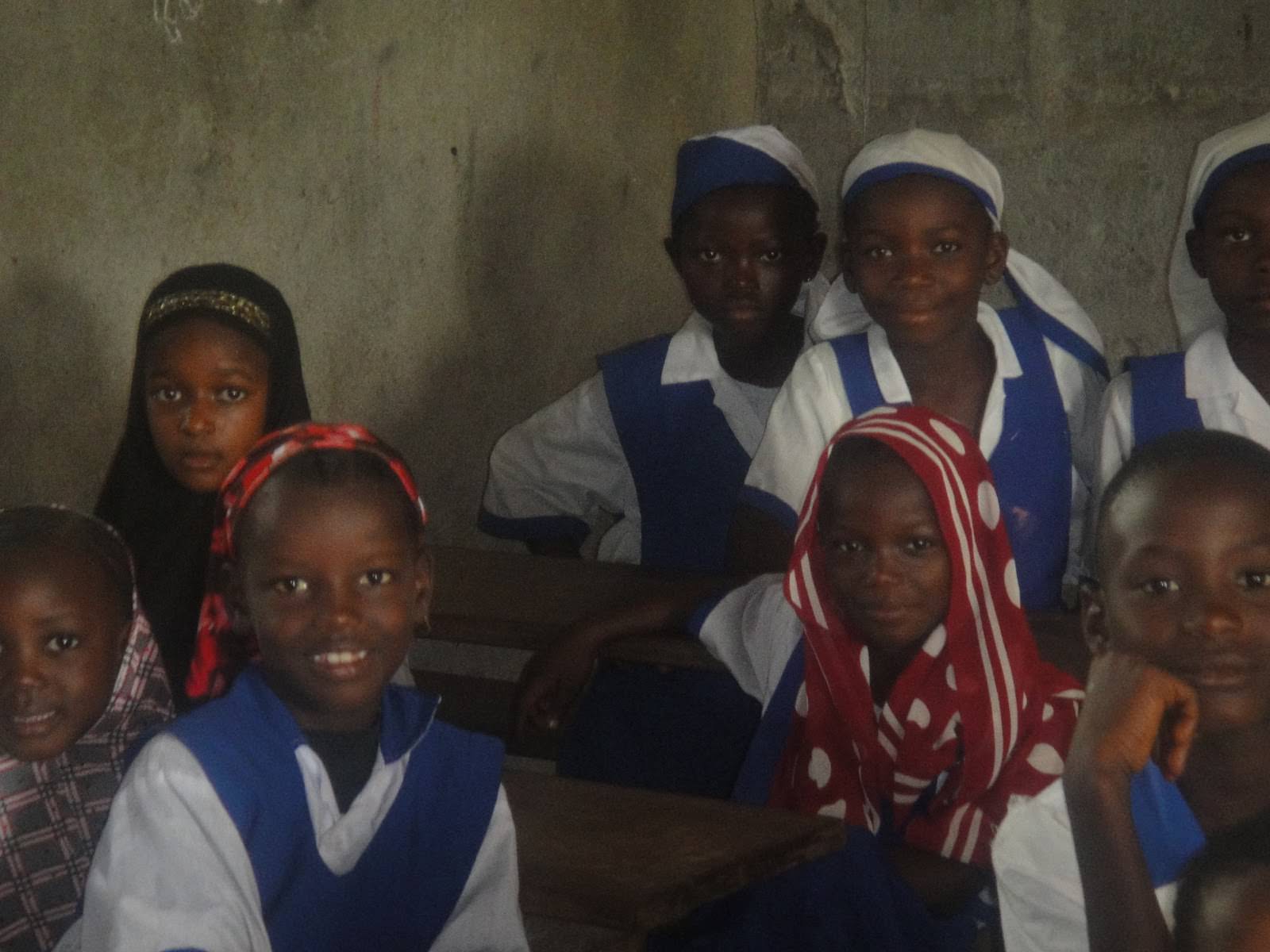 But the teachers and the principal seem pretty devoted to this motley little place.  It’s tidy and friendly.  Kids get a meal of bulgur at mid-day, provided by the World Food Programme and cooked up by local moms.  At the end of the visit the kids huddle around me for a handshake or a wave, and I notice they are imitating me, so I start doing weird jumps and spins and they all join in.  We’re all laughing and half of them are falling on each other because everyone’s crowded around so tightly.  It’s very sweet.

On the rough dirt road to visit the next school, we get a spectacular flat tire. ‘Spectacular’ because when we get out and see the puncture, it looks like a big sinister smile – the tire is cut wide open, sidewall to sidewall. I’ve never seen anything like it. For a country that makes rubber, this tire looks like it’s made of canvas.

The driver changes it out with the spare in about six minutes flat – really fast, considering he has to set the jack on the sandy road and it’s sinking in as he works.  But the spare has a big bulge in it – it has clearly been poorly repaired and doesn’t look like it’ll last.  It doesn’t -“ twenty kilometers later, we’re stopped again and this time without a spare. 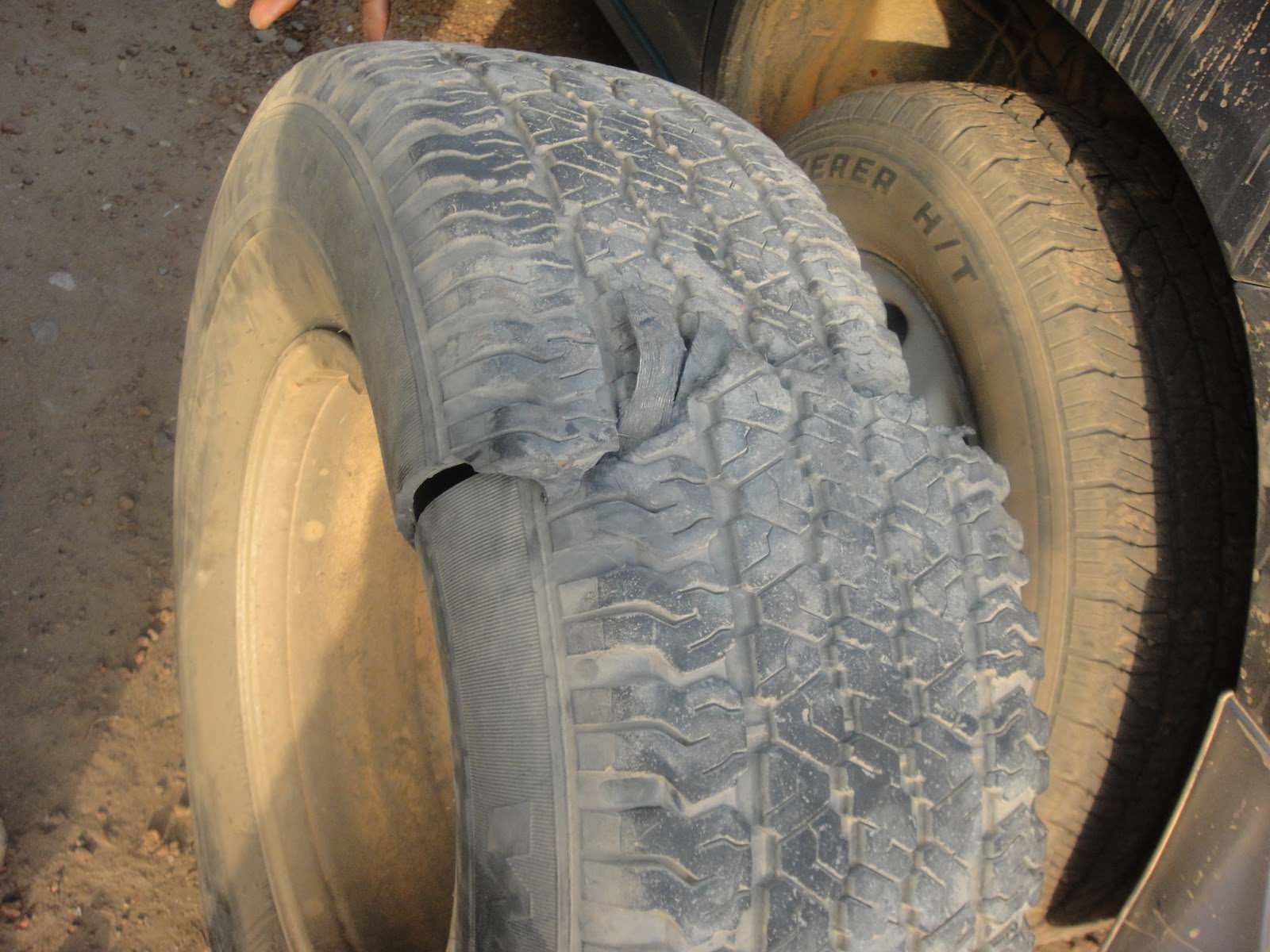 There’s a family across the road from our vehicle’s resting spot.  They show us the mound we have to stand on to get enough cell signal to call the other team for a rescue.  The mom brings us fruit and the dad whacks at some coconuts for what seems like a really long time, trying to give us coconut milk.  Grandma is wearing a black bra and skirt and sitting in the shade, weaving a crawfish trap out of reeds.  Her daughter demonstrates it to me, how the crawfish swim in but can’t get out, and how you open one end to get them out.  Ewwww.  Funny that they’re the poorest people I’ve seen in Liberia so far, but instead of seeing me as an ATM machine (like the hotel owner in Buchanan) they see me as a stranded traveler and help generously.

[…] started writing this blog in Liberia, continued here, went on to Dubai, Cambodia here, here and here, saw NYC at the height of tourist season, ate my […]